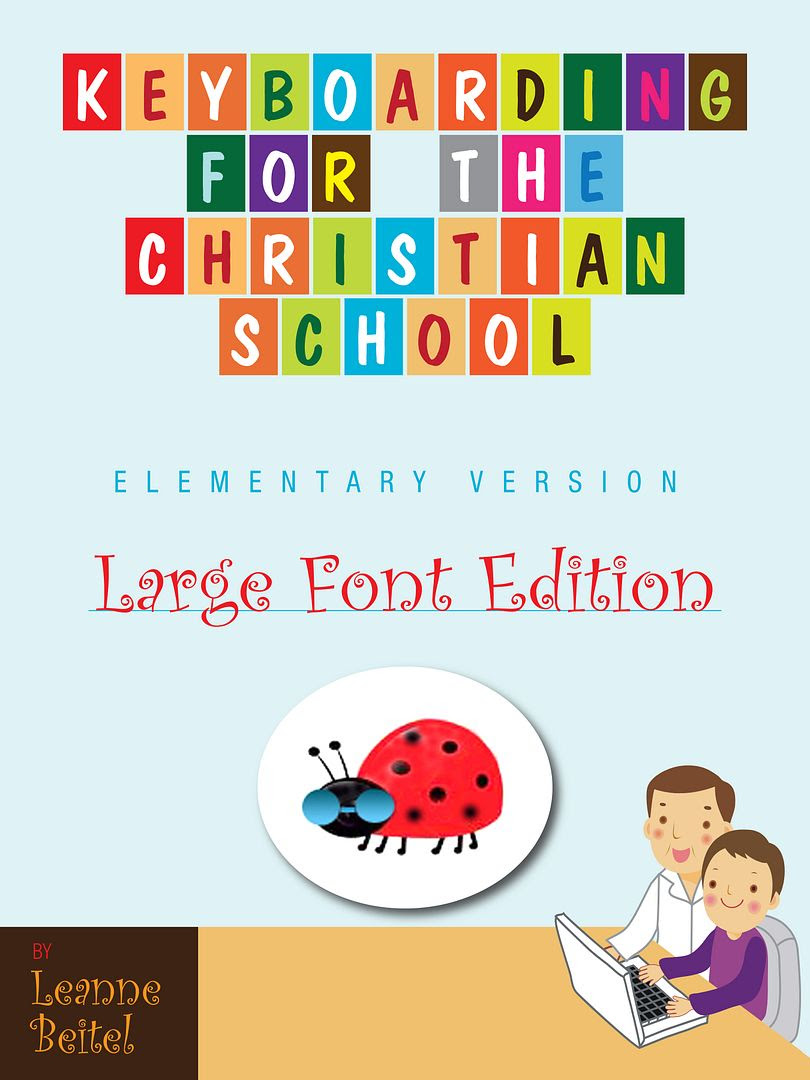 We live in a world that requires keyboarding and word processing skills. These skills have become so valuable that all children truly need to learn to type well if they want to succeed in the world as adults. There are many flashy games available to help teach typing, but there is also an alternative. Keyboarding for the Christian School by Leanne Beitel is the alternative.

I received ebook of the elementary version of Christian Keyboarding to review. Christian Keyboarding takes a different approach to teaching typing than many of the typing programs available today. Rather than giving the students a game with random words to speed type to blast a robot or invader, Christian Keyboarding asks the student to look at a paper and type what is written. There is no timed drills during each lesson, no pressure to beat a clock, no pressure to win a game, and more importantly, quickly the text changes from gibberish "asfd" to more meaningful text like"he said he feels his dad is sad;" in lesson 7. By lesson 10 Biblical excerpts are also included. By removing the competition component, students begin to learn touch typing. Since they are looking away from the computer screen to read the paper they are encouraged to keep their eyes off the keyboard. The last couple of lessons cover word processing topics with screenshots utilizing Microsoft Word.

Tiger was my test subject for Christian Keyboarding. He has wanted more and more to type his work but has been inefficient as a result of a lack of good keyboarding skills. Over the years, he has used various typing tutors but always got so caught up in the game and trying to win that he would read the words and then proceed to look at his fingers to quickly type the answer. My printer was out of ink so we split the computer screen. I placed a blank document to type on on the left side of the screen and then placed the lesson on the right side of the screen to help him with the side looking. After 8 lessons in Christian Keyboarding, I had Tiger go back to his game typing instructor and ran a homerow test on him. Not only did he not feel the need to look at his hands but his speed had jumped from 10-15 wpm to 25-27 wpm with 95-99% accuracy. He was thrilled!  In the past I have taken pieces of cloth and draped them over his hands in an effort to dissuade him from looking at his fingers, but I never once had to remind him to look up. He knew where every key was. On top of the improvement, Tiger enjoys this program more than the games because he doesn't feel stressed. I thought for sure he would balk at such a simple program but he loves it. I regularly find him getting his day started with 10 minutes of typing practice before he moves on to his other subjects. One thing he did not like is after about 10 lessons there is a sentence to be typed that includes a couple of letters that have not yet been taught. Tiger just skipped those sentences since he knows he will learn those letters later. When I asked the author about this, she said that there were only 2 or 3 letters that were not known yet, so go ahead and try the sentence. Tiger did not want to because he didn't want to feel tempted to look at the keys.

While I was a little reluctant about this product, I am so glad we were blessed with it. Christian Keyboarding is simple but effective. It teaches real skills without stress. The one thing I think needs to be improved are the screenshots of the word processing documents. The version of Word used is an older version and an updated version should be included. In addition, these screenshots are not helpful to those who don't have Word. Keyboarding for the Christian School, Elementary version is $12.95 for the pdf or $45 for a physical book. Overall I was really impressed and intend to continue to use it with Tiger and then with the girls.


Be sure to check out what my the other members of the Crew thought.

Disclaimer: I received a complimentary pdf download of Keyboarding for the Christian School, Elementary Version in exchange for an honest review. All opinions are my own.
Posted by Raspberry Leaf at 9:17 PM