Tiger loves to watch Chef Brad’s Fusion Grain cooking show on our Roku player. He has always enjoyed cooking, but now at 10.5 he wants to cook more and more. This is good… and bad. Mostly he does a great job but sometimes he makes a big mess and gets a little too creative.
I remember I was first taught to bake bread as a married adult. Prior to that, I was freaked out to try. Bread was hard right? It was easy to mess up right? Tiger on the other hand is fearless in the kitchen. I think a large part of it comes from the fact that I don’t often follow recipes to a T coupled with I do make a lot from scratch including pie crust and occasionally bread. I was never afraid of making anything that I remember my mom making- but bread and pie crust were supposed to be too hard according to everyone I met. (For the record my mom says she made bread and I know she made pie crust but I don’t remember the bread and I don’t remember seeing her do either one).
So how did we come upon Sprouted Spelt Potato bread and what does this have to do with Chef Brad? Chef Brad made a spelt potato bread on the show. It looks so easy- dump the flour and the potato water in the Bosch mixer and voila- bread! Now he knew he couldn’t do that because I can’t eat flour and flour products. I can on the other hand eat sprouted grains so he had to start with sprouted flour… that in and of itself can create some challenges and changes with bread making. Furthermore, he wanted to duplicate Chef Brad’s recipe… but he wanted to use a gluten free rice sourdough starter instead of the sourdough starter called for in the original recipe. The big problem with that was that he had no idea that  sourdough starter would take several days and he wanted to make the bread ASAP! I also have no idea how it would work to start with a GF rice sourdough starter and then add sprouted spelt flour… someday we will try but this was not the time. I have a recipe for 100% sprouted wheat bread but it uses half moist grain and half dry sprouted grain that you then grind. In order to help him make this bread, I was going to have to get a little creative and help him.
We started with Traci’s Transformational Cookbook recipe for Sprouted Wheat bread and referred to several recipes for conventional bread   and then we changed it- almost entirely. Really the only thing we kept the same was the method.
Prep work:
Soak spelt overnight, drain, rinse, and dehydrate. Then grind and sift out 5 cups of flour.
Boil 1 cubed potato in 2 1/2 cups of water. Measure out 1 cup water and take another cup and blend it with the potato.
1 cup hot potato water (105 or so degrees)
1T plus 1/4tsp Active Dry yeast
1 T honey
2tsp sea salt
4 1/2-5 cups sprouted spelt flour
1 T olive oil plus more to oil the surface, pan, and hands
Mix 1 cup hot potato water with honey, yeast, and oil. Let sit for 5 minutes. Meanwhile, place 3 cups of the sprouted spelt flour in a large bowl and mix in sea salt. Pour the yeast water and the blended potato water into the bowl. Stir to combine. Slowly add the remaining flour. After about 4 cups or so we turned it out on a well oiled board and kneaded the rest in with well oiled hands until he held together. Sprouted grain dough will be STICKY. If you knead it too long it will break down. Don’t knead more than 5 minutes or so. Shape into a well oiled pan and let rise until double- about 30 minutes depending on temperature. Bake at 350 for 40-50 minutes until browned on top. For softer crust, rub all crusts with olive oil.
We put just a bit more than half of the dough in the loaf pan and the rest we pat into a quiche pan. Tiger really wanted to make the rosemary flat bread Chef Brad had made too. I didn’t know that he had recommended not rising the dough and baking on a pizza stone at 500 for 7-8 minutes so we let our flatbread rise (it didn’t get as puffy as the regular bread)  and baked it with the regular bread. To make the flat bread, Tiger made finger dimples with his finger tips and then poured olive oil on top. A sprinkle of sea salt, pepper, and rosemary finished it off.
I have to say both breads turned out excellent. They are filling, tasty, and I would consider a success. They are not light and fluffy like white bread, but they are not super dense either. 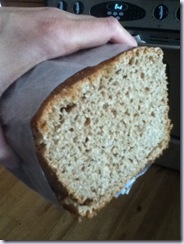 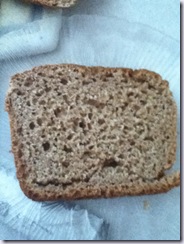 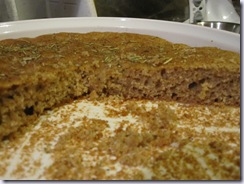