Recently the Schoolhouse Crew reviewed Speekee TV and the accompanying FastTrack Lesson Plans. Speekee is a British production filmed in Spain with Spanish children. Pronunciation and vocabulary tends to be from Spain as well (juice is zuma de… vs jugo de…). Speekee is not a new product as they have been around for a long time. Instead of just producing videos, which may not be compatible with international DVD players, Speekee is now available online. Speekee TV is  a monthly subscription, for children ages 2-10, which costs $7.50 per month or $60 per year and includes the following (taken from the website):

Speekee TV uses songs, some conversations, and this cute little puppet, as well as a couple sock puppets, children, and an adult to teach Spanish to children ages 2-10. Each of the 10 episodes teaches basic phrases, language and conversation through repetition and song. Included with the subscription to Speekee TV is an optional weekly email or website access to the FastTrack lesson plans for 40 weeks of 4 lessons per week. These lesson plans flush out the learning with worksheets, flashcards, activities and repetition with a parent.

So, what do I think of Speekee? In order to understand my opinion it would be best to understand my language background. I have taken several years of Spanish in high school and college. Even after many years, I have very rudimentary Spanish speech abilities despite getting straight A’s. My husband is fluent in Spanish. At times we will use Spanish to talk when we don’t want the children to understand us- despite my bad grammar and occasionally wrong vocabulary! 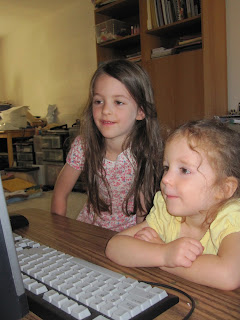 “That’s Speekee! I like Speekee!” proclaims Strawberry while I was writing this review. At first my children, especially the oldest (8 and 10), were really overwhelmed with the thorough immersion in Speekee because I turned the subtitles off and then let them watch. Later I turned the subtitles on for the first viewing and then turned them off again to help them really pay attention to the Spanish. Despite the initial shock, my children have enjoyed Speekee. I have heard the songs being sung throughout the days and I hear Tiger plinking out the songs on the piano. Any time I ask if they want to watch Speekee, the answer is an emphatic, “Yes!” Strawberry will gleefully sing along with any song she can while the video is playing. I have also incorporated more Spanish with the children throughout the day much like the FastTrack lesson plans have suggested (although not exactly like them because they didn’t fit into our day very well) but I have used the vocabulary from the video frequently. Here is a short video of Tiger demonstrating the beginning of each Speekee episode. His puppets are rudimentary- he later redid them shown below.

Despite their enthusiasm, I need more time to see that that Speekee is really teaching my children Spanish. For example, when I ask about colors (FastTrack lesson plan) my children refuse to use the Spanish even though I am asking the questions in Spanish and clarifying in English if necessary. When asked what the word is, they may or may not be able to answer.  As I sit and watch an episode with the children I pause it at the appropriate times and have the children practice saying the phrases and asking questions. While I do this I wonder if I would be able to facilitate if I did not have a Spanish background. It seems like I would not be able to answer questions, correct pronunciation, know when to pause, prompt the proper vocabulary, etc without knowing Spanish myself. The FastTrack lessons often included having the parent ask questions in Spanish and then having the child answer back. Without knowing Spanish, the pronunciation would be problematic for the parent.

There is much to like about Speekee though. I liked the immersion and  appreciate that old vocabulary was revisited in later episodes.  I spent many years conjugating verbs and that has made it very difficult to understand when to use the right verb. With Speekee, the verb is presented in the right form for the instance. Speekee is by no means a complete Spanish curriculum, but overall I think Speekee TV has been enjoyable for the children as an introduction to Spanish.

Be sure to check out what others on the Schoolhouse Review Crew thought by clicking the banner below.

Disclaimer: As a member of the TOS Crew, I received this product, at no cost to me, in exchange for my honest review. All opinions are mine.
Posted by Raspberry Leaf at 11:49 AM