I am so excited. I just got a Saratoga Jacks thermal cooker… and the other day was going to be busy. I made dinner at 10am… Veggie and bean curry soup and rice. Tiger helped me with a few photos. 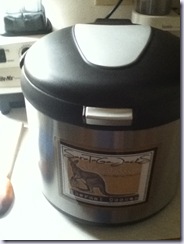 A thermal cooker is kind of like a crock pot except you bring the food to a boil for a couple minutes and then take the pots off the heat and place them inside an insulated container to allow the latent heat to cook the food slowly over the next several hours. I know it is possible to do stuff like make steamed bread and other dishes but for now I only know how to do soupy things and rice… 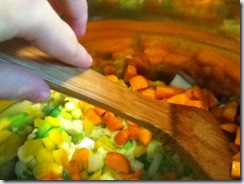 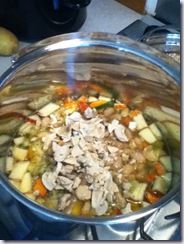 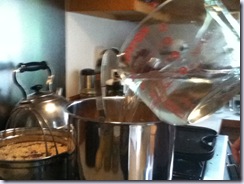 After sautéing the veggies and curry powder, I added water and brought the pot to a boil. Meanwhile I put rice and water into the smaller pot that fits inside the top pot. 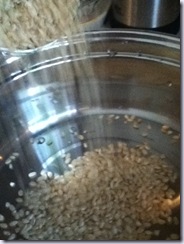 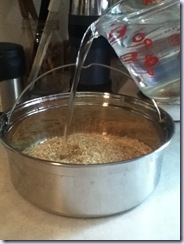 Here are both pots coming to a boil on the stove… 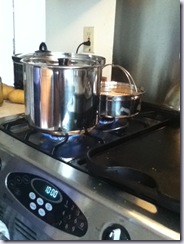 After boiling 2 minutes (vegetarian dish) then stack the pots, slip them into the thermal insulator, close the lid and dinner is done! 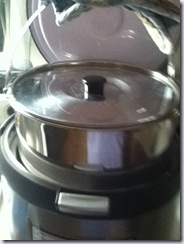 Dinner turned out fabulous. When we opened the cooker up, I added some lemon juice and coconut milk to the soup. The soup was the perfect eating temperature- hot but not too hot and the rice was done to perfection. I think I might have to make a giant pot of rice to pack into smaller portions it turned out so well!

Tonight’s dinner was in the cooker by 9:30. Lentils and veggies and rice. We will top with salsa and I will make some vegan veggie based cheesy sauce and spinach salad to add to it. Dinner should be on the table half an hour after we get home from church tonight!

Posted by Raspberry Leaf at 9:57 AM