A couple of months ago, I saw the chore and task planning app Motivated Moms iOS App (with full year server access) from Motivated Moms and thought it looked awesome. I even downloaded the trial version and really liked it, but the two week trial was really too short for me to know if I would use it and I didn’t get a chance to upgrade. Then I was offered a chance to review the App for the Schoolhouse Review Crew and I jumped at the chance! The Motivated Moms iOS App costs $1.99 and comes with two months of server access. In-App purchase allows additional server access for $.99 each month or $7.99/year. It is also available for Android. Now for just a couple of dollars it is easy to try the app for two months and then upgrade if desired. 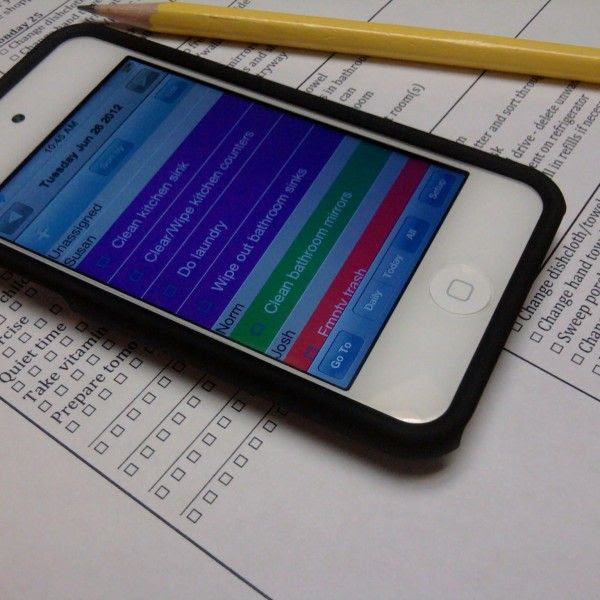 Over the years I have tried various methods to break down all the tasks I need to accomplish into bite sized pieces with varying degrees of success. Often I can get the daily stuff taken care of, but those pesky once a year or worse three times a year things just don’t usually get done on a regular schedule. Enter Motivated Moms App! This app breaks down all the daily things, household management and tidying, and includes those couple of times a year items so they will get done regularly, and daily Bible reading assignments (which can be turned off like all other tasks if desired). In addition to breaking down common household tasks, Motivated Moms allows for unlimited task additions. I used this feature extensively to help myself remember to sit down and spend time prepping for co-op or to go to the store.

Within the app, there is the ability to view only the tasks for “Today,” “Daily”",” and “All” tasks. I used this feature frequently. On days were I was not going to be home much, I would click Daily and just do the bare minimum. On days where I had more time, I would do All and on busy at home days I would do just the list for Today (plus a couple of things from Daily so I could check them off). There is something about opening the app and clicking done on Make Bed first thing in the morning! I am starting to understand why some people add things to their lists that they are doing anyway just so they can check them off and feel successful! The items on the list can be sorted by A to Z, room, person, or user sorted. The user sorted allows me to order my tasks in order of importance. I love this feature. (The user sort screen does need a little streamlining to enable quicker task editing and returning to the check list screen. I think they are trying because during the review period, I updated the app and it was a little different navigating, improved in some ways but made worse in others.) As tasks are finished, a checkmark appears and then the item drops to the bottom of the list.

Did I already mention that I love that the app reminds me to do the infrequent things I often forget? During the review period, it reminded me to change my furnace filter. I had been meaning to do it but kept forgetting- for the past year. I opened up the Motivated Moms App and there it was: change filter on furnace. I asked B to do it since it is way up high behind several screws and a piece of sheet metal and poof, task completed and long overdue furnace filter changed! I also like that if I don’t get to something, it will be back. This was especially nice when I had a really busy week getting ready for the co-op play and just didn’t have time to do some of the daily tasks daily. I also like that I can change the due date on an occurrence of an item. That item will then move to another date. It won’t affect the other other occurrences of the task in the future, just the single occurrence. I often did this on Fridays because I am not home most of the day. I would then change the due date of the most important tasks so they would still get remembered.

A feature that I need to utilize more is the ability to color or “assign” tasks to others. Initially I thought this was only useful if I was sharing the app across devices and “assigning” for my kids, but, by using colors, I can keep myself accountable when I give and instruction for a task to be completed. When I go through my checklist I can see that it isn’t completed yet or has been completed by that child.

I had a really long list of things to do and most got checked off.  Here is a screenshot of some of it. Since Tiger is responsible for dishes,I did color that one green.

While I didn’t use this feature, an important feature to note is the ability to sync across devices. This would be especially helpful if multiple family members utilized iOS devices and you wanted to assign tasks to various people. They could then “check back” by checking off their tasks. Another feature I did not use was email/print daily task list. For some that would be helpful, but for the way I was using the list, it wouldn’t have helped me. I do think it is a valuable feature that could be very useful for some people. In the future, I might print it out on Saturdays to help coordinate the family to the family work.

I wish I could edit some of the pre-programmed tasks. For example, I do not have a microwave, but I do have a toaster that needs to be cleaned. Yes, I could just think in my mind that I need to clean the toaster oven when “microwave” pops up, but I would prefer to see toaster oven so my list feels more mine. I would also love to be able to change the occurrence of a preset task. For example, “Water Houseplants” pops up on Saturday. I have 1 houseplant- an orchid- that needs to be watered on Wednesdays. Yes, I can just check off that it is done on the wrong days or change the due date on that one occurrence, but I would rather edit it and be done. The workaround is to hide the task and then make my own. When I contacted the developer to ask about editing pre-programmed tasks, I was told that they are working on developing a way to edit the preprogrammed tasks as well as a search function so you can find tasks within the program (Maybe you want to know when the next time you should change your furnace filter is). While neither of those features are available, now, I think they will make the app more user friendly and even more useful.

I really like the Motivated Moms App. I think it has a bit of a learning curve, especially if a home is cluttered, but over time, I have gotten more and more in the habit of using it and I love it. After I submit this review, I will be checking off that box next to Submit Motivated Moms Review in my app. One more check towards a successful day! It might be called the Motivated Moms App, but it can be used by anyone who needs some structure to their daily tasks.

Be sure to check out the other reviews. The crew also got to review the printable planners.

Posted by Raspberry Leaf at 2:57 PM