Gift Giving or Merging Traditions or Taming the Chaos

Some people hate the holidays because of the gift receiving and the materialism of the season. Christmas is about celebrating the birth of Jesus Christ. What is a birthday without some presents though!? We celebrate Jesus Christ all month long from the nativities we display to the hymns we sing to the stories and scriptures we read and the nativity play we do each Christmas Eve. We talk of the symbols  of Christmas. For example, Santa is a symbol of charity and selfless giving, gifts given are a symbol of the ultimate gift which Christ gave us. Even though we focus on the Savior the whole season, we realized early in Tiger’s life we needed to have a plan for how many and what kinds of presents to give so as to maintain the spirit we wanted in our home.

When I was growing up, we did not attend church and the Jesus aspect of Christmas was not really part of our celebration.  Even so, Christmas morning was always a magical morning. Presents were rarely placed under the tree before Christmas. My sister and I would come out Christmas morning and the tree would be full of presents from our grandma, Santa, and my parents. Not only that, but there was always some wrapping paper that we never saw before or after Christmas morning that was only for Santa. Since my birthday is in December, I usually spent some of my birthday money to buy my sister a present, but I don’t remember her leaving something under the tree for me. It didn’t matter though because there was always an abundance of toys and clothes from my parents. While we were not wealthy, and often my parents struggled with money, my mom planned for gifts all year. She would find things and tuck them away to give to us later so she was able to afford to give us a rather large Christmas without debt.

In BC’s family, they were religious and gifts were not as many or as big as what I grew up with. There was a present from Santa, one or two from the parents and then each of the 5 boys would give a present to his brothers. There was also a box from an aunt or uncle for the family.

As BC and I have had our children, we had to merge our roots. I wanted the magic of Christmas that I remembered  but we also didn’t to overshadow the celebration of the birth of Jesus Christ with too many presents. Furthermore, the more children we have had, the more chaotic it would be to have a ton for each child. We don’t like accumulating a ton of toys for the sake of toys (which is NOT what my family did) but it seems with more kids it would be easy to just accumulate junk for the sake of accumulating. As we worked to figure out how to merge our backgrounds and create our own traditions, I stumbled upon someone who had the idea of 3 gifts for each person to represent the gifts given to the Savior. Something “gold” or the big present that is the dream and hope of the child, something “myrrh” or something for the body like clothing, and something “frankincense” or something for spiritual or educational growth. This helped me get a vision for what we would do.

While we don’t necessarily follow the 3  gifts of the wise men to a T, I do keep it in mind while I select gifts for them. Our children will get one thing from Santa- usually something they really want unless what they really want requires batteries to make obnoxious noises and play for them or the item requires no imagination. As our kids get older sometimes it is out of our budget or conflicts with our family culture so we don’t get that either. They also receive a gift from the parents, some article of clothing, and a family gift of a game. Sometimes BC or I will also make a special gift like doll clothes or a treasure box. These homemade gifts are often made in conjunction with one or more children for a gift for their sibling. During the time before the holidays we talk to the children about what they want to give others rather than asking them what they want. BC always takes the kids shopping or into the garage to make something for me. He also likes to give them each $5 to spend on the other siblings unless they have chosen to make something. This year I have already been approached by one child with her desire to make an article of clothing for her brother.

These are some presents we made a couple of years ago- a cradle from  BC for Butterfly (a doll swing followed the following year with Tiger’s help), pajamas, doll cloths, and a treasure box. 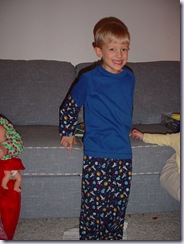 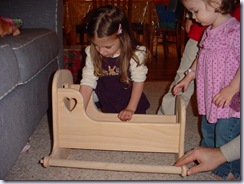 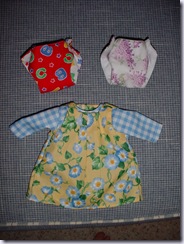 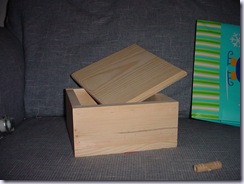 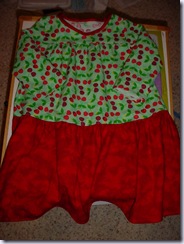 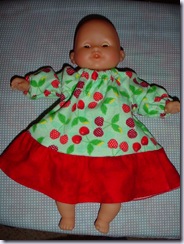 Last year I made some doll clothes for the girls and Pumpkin Pie wanted to make an apron and matching doll apron for Butterfly and her Felicity doll. 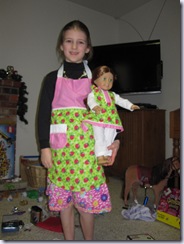 In addition  to the gifts for our immediate family, I usually make homemade gifts for extended family members. I have done things like fleece throws and car garbage bag holders. One year all the men received pajama pants I made.

In order to bring in some of the magic I remember growing up, we don’t place the presents from parents or Santa until the children are in bed on Christmas Eve. They usually put their own presents out before they go to bed. While we have continued to have Santa in our home for the season, we don’t make a big deal and our children know that Santa is a game we like to play for fun. They know the true origin of Santa and why we like to play Santa. Also, just as when I was growing up, Santa has his special paper to wrap everything with. That paper does not reappear after Christmas elsewhere. The rest of the presents are wrapped in homemade gift bags or recycled gift boxes. A tutorial for gift bags can be found here.

Even beyond the gifts received though, we really want the children to appreciate giving. When it is time to pass our presents, we have someone choose a present from under the tree to give to another. All four of our children can’t wait to have their turn to give. We then all watch the opening and exclaim over it. Sometimes we take a few moments to play with the toy, try on clothes, or play the game before moving on. We don’t worry about the time because each gift is special.

What giving traditions do you have in your home? How do you keep Christ the center instead of presents?

Posted by Raspberry Leaf at 9:11 PM