TruthQuest History is a literature-based history study focusing on God's hand in all things. TruthQuest offers several different epochs for both older and younger students. I received American History for Young Students I (Exploration - 1800) which is geared towards 1-5 grade. Each guide book has a short commentary followed by a  book list on each topic to give the parents a springboard to not only make history come alive but to illustrate God's ways throughout time. 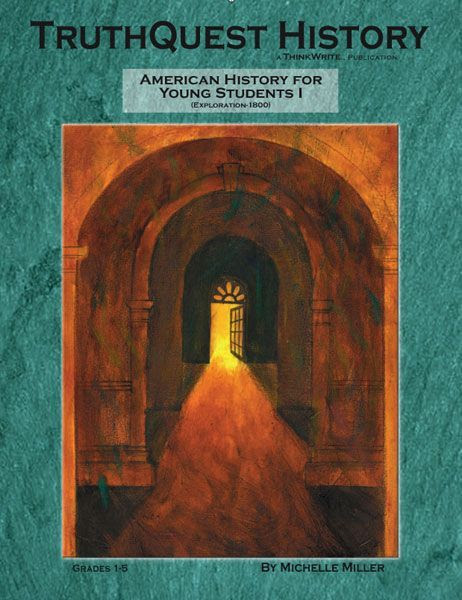 I really love the extensive book lists covering so many areas of American History. I also really like that many of the entries are annotated with either cautions about possible worldview problems or information that the author deems important and an approximate independent reading grade level. The lists include fiction, non-fiction, and a few activity suggestions as well as periodic "ThinkWrite" prompts to help children narrate or write about what they are learning in relation to America and God's plans. Occasionally a film or audio is mentioned as well. In addition to the book lists within each topic, the appendix includes possible responses to the ThinkWrite prompts, an alphabetical list of books by title, and a bibliography of works used.

Many of the suggested works tend to be older and some are public domain. Not all will be available in your library. I belong to a very large library system which won a national Library of the Year award this past year. I can usually find almost anything in the system that I want, but I did find a large percentage of the books were not available at my library. This isn't the end of the world though, because the introductory pages suggest that the list is not THE list but just A list and no one should feel obliged to use all of the books presented. Despite not being able to find all the books, the TruthQuest guide did give me a springboard to search for other books on the topic.

I love the premise of TruthQuest: Get children excited about history and teach them not only the history of man, but more importantly, the history of God's hand in all things, by using great literature and resources rather than textbooks. In order to help the parent accomplish this goal, the commentary is read to the children, or they read it  themselves, before beginning to read books on the topic. This is a great idea as it prepares the child to look for spiritual issues within the context of the events; however, the way that the commentary was written is a little too conversational for my taste. For example, in talking about the Lord bringing people to the American Continent, it says, "And since He is a good God, we can know His plans are for good! Yeah!"


I found myself distracted by the tone and editorial exclamations like "Hmmmm" and "Yeah!" I also found that sometimes the commentary was trying so hard to explain things that the sentences got unnecessarily wordy. For example, in talking about the French, Spanish, and English and where they claimed land, it says:


The French mostly held the northern area of Canada... The Spanish held the southern areas of Florida and the lands close to Spanish Mexico. And the English hand the land in the middle... Do you see? It was like a sandwich! Three distinct layers! Do you get the picture? You might be interested, then, in this: while things were very far from perfect in England, at least England had a little more religious and political freedom than either France or Spain, and that is very, very, very important! Hmmmmm.

As a result of the way the text is written, I often decided not to read it to my children. Instead, I  read the commentary for tips of what I might want to mention during our history study time. I then presented that and dove into the books.

Overall, I really like TruthQuest. I like having a guide to help me place important events in history in order as well as a list of "living books" to teach with. I also like that I can easily modify our study to include all of my school-aged children. Using TruthQuest as my guide I was able to make the settling of Virgina and the story of Pocahontas come alive not only for my fifth grader, but also for my kindergartener and to some extent my two year old.  TruthQuest guides are reasonably priced. The print version of  American History for Young Students I (Exploration - 1800) costs $24.95 and the PDF version costs $19.95.A sample of the guide can be found here so you can see if it will be a good fit for your family.

Be sure to check out what my other the other Crew members thought about this product on the Crew Blog.

Disclaimer:  As a member of the TOS Crew, I received this product, at no cost to me, in exchange for my honest review.  All opinions are mine.
Posted by Raspberry Leaf at 2:56 PM