Over the years the kids have learned a lot... but I am not the best at keeping formal records. I get to the end of the year and look back. I  know that they have accomplished a lot, since I can look at their current place and see what they learned since the last year. Unfortunately,  I can't remember what exactly we did and when. This is part of why I am resolved to blog more... to help me keep records of the stuff we do. But in addition to that, I have been working on more record keeping at home. With Butterfly and Pumpkin Pie, I have not settled on a good way of keeping formal records yet. I do keep their completed work in a box... but nothing written down from week to week.

I tried downloading a planner and filling it in with my plans and then checking off what was done. That has always lasted for the first 6 weeks or so...

For the past 2 months I have been working with Tiger on record keeping. As he gets older, it is more and more important that we keep a record of what he has read and what he learns. It also helps me see where we need to focus more time. Also, the way I have developed to keep his records gives him some accountability too. 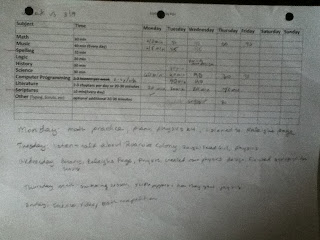 Together we sat down and discussed what he thought he needed to cover. I  told him a minimum amount of time he would need to spend time every day. How he divides that time is up to him. He created target goals of how much of each thing he should do each day. Once he had created target goals, we totaled them up and they were more than my minimum. We also talked about how sometimes he spends 2-3 times longer than "allocated" on a given day, not to worry about it. It is ok to only hit each thing 2-3 times per week so he can really get involved in his studies.

At the bottom of the page, I write down various books read, special projects, and more details to justify what was written above. We do it together. We are still missing some of what he is doing, because the more freedom I have given him to learn from among the materials I provide, the longer he spends in learning time each day. It is not uncommon for him to spend 6-8 hours in uninterrupted learning time. When he gets less than 3-4 hours of uninterrupted time, he gets quite testy and insists he needs more time to study. Considering he is a 10 year old boy and 6 months ago he was whining about "doing school," I am amazed.

As I look over the last couple weeks, I notice he hasn't done any spelling. While I have not been too worried since he spells near perfectly most of the time, I decided to get out his spelling book and quiz him. I picked every hard word I could find and sure enough, he knew all the words I asked him! I guess spelling is not necessary right now. Oh well. I also notice as I look at his list that writing is not on it. We beta tested a writing program which was fabulous, but he really struggles with WANTING to write. He got a bit burnt out so we didn't put it on the list. He is now asking me to help him with writing so we are hand writing that in the blank lines below the block of subjects that are pre-printed.

Some weeks are one subject heavy and some weeks are more balanced. The week Tiger was in a math competition, he spent 3+ hours a day on math. He will also go over the last couple of weeks of records and take note of what he has not been covering. He will then make sure to hit those things on a given day. It is really wonderful to see him taking ownership of his education.

What do you use for record keeping?
Other members of the TOS Crew also answered this question. You can read about their ideas here.

Posted by Raspberry Leaf at 7:18 PM